A goaltender by trade, the freshman had to skate out when the Wolverines' lineup was depleted. 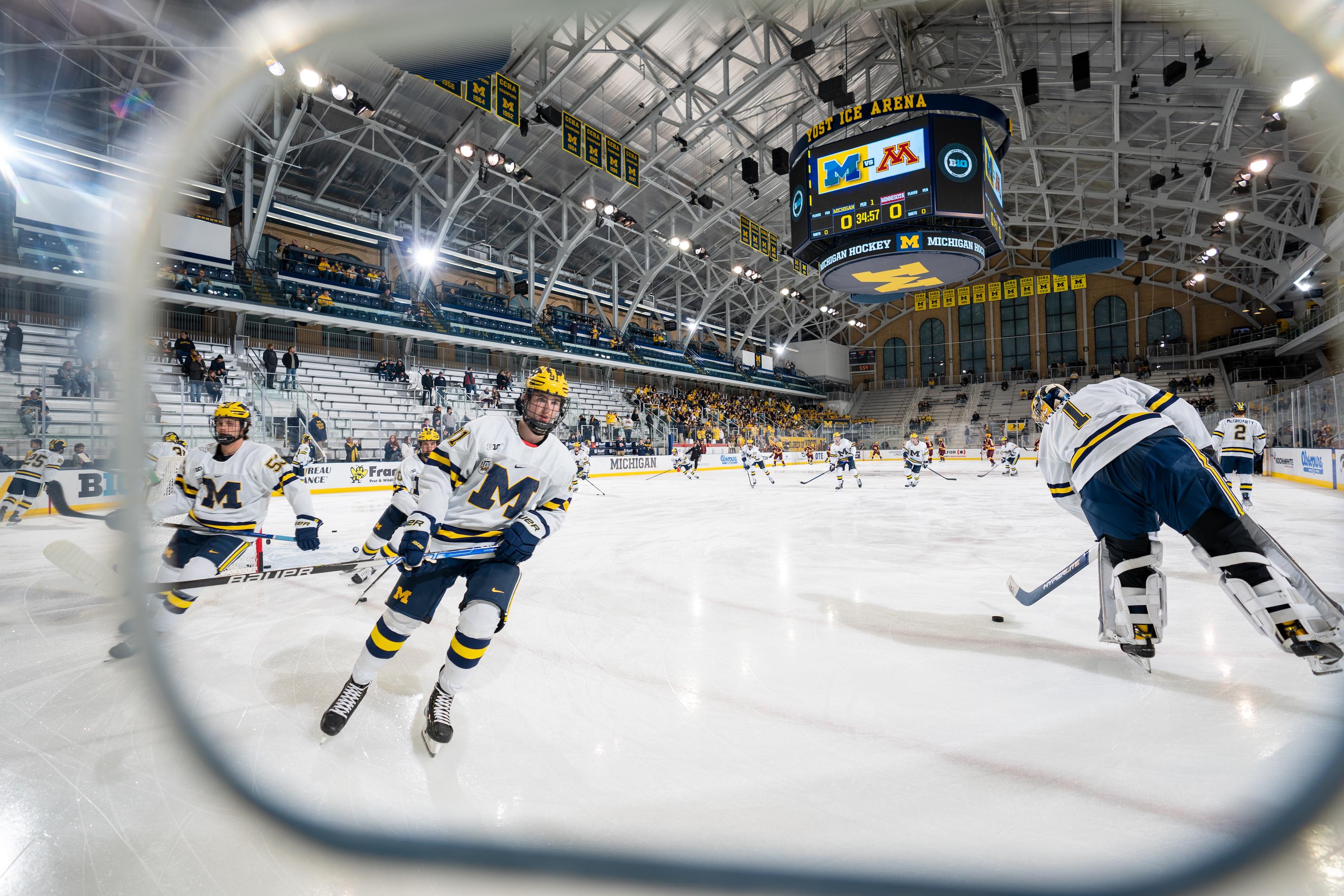 Goaltender Tyler Shea skates during warm-ups ... as a forward for the University of Michigan on Nov. 17. Photo courtesy of Michigan Athletics

Often times a goaltender will tell you they took up the position early in their youth hockey careers. Maybe their Mite team rotated goalies each game, or their Squirt team's goalie couldn't make a tournament so they volunteered to put on the pads and fell in love with the position.

There never was any question in former Jr. Ducks goaltender Tyler Shea's mind that he was meant for the net. He started as a goalie, and he continued as a goalie through AAA hockey and Juniors.

When he committed to the University of Michigan last summer after a strong final season of Junior hockey for Wenatchee of the British Columbia Hockey League, it was as a goaltender for a program coming off a Frozen Four berth. That's what has made the events of the past few months so outrageous.

You see, Shea, who had never skated out in a formal game, found himself playing left wing for one of the nation's top Division I programs in a Big Ten series in November and again on Jan. 6 in an exhibition against the U.S. National Team Development Program.

The Nov. 17 game against then No. 1 Minnesota was "my first ever organized game as a forward," Shea reiterated. "I did Learn to Skate with player gear for five months when I was 5, 6 years old, but my goal from Day 1 was to be a goalie.

"My dad's best friend from high school had a son who played goalie. He took me to a tournament, and I fell in love with the game and being a goalie, the role he had on the team. That's when I told my parents that's what I wanted to be.

"I had played every game of my life as a goalie. You pick up some things forwards do, but I definitely stuck out."

Shea was called upon in November because of a waves of illness that went through the Wolverines lineup.

"It took out a lot of our guys," Shea said. "We were waiting to see what would happen, just trying to get through the week together.

"(The coaching staff) had a conversation about two days before the game about whether we'd even play or not. We knew we were shorthanded, but it's a big week playing Minnesota. We decided to do this for the guys who couldn't play."

All well and good, but then the other skate dropped on game day.

That proved prophetic. Shea dressed both nights as the fourth-line left wing but did not take a regular shift. He did, however, have to serve a penalty to start the third period after the Wolverines were late returning to the ice. So he got a shift, and the rest is history.

It also led to some interesting what-if scenarios.

"I did get a shift, five seconds," Shea laughed. "As soon as the penalty was up, I bolted right back to our bench. We were in their zone so I was in the clear. The only question mark was what if they had the puck in our zone? Would I jump into the play?"

Positional changes are one thing, but remember Shea had not worn player gear in a decade and a half, including player skates for that matter.

"They fitted me in all new gear that Friday," he said. "I skated around the ice for an hour. The first night I wore player skates. The balance point was different, and I was struggling.

"The second night they let me go back to goalie skates, which was helpful. It takes weeks to get used to new skates, and I had a few hours."

That weekend also happened to be one when his father flew out Ann Arbor, Mich., to see the series.

"It was cool to share that experience with him," Shea said. "The rest of my family was watching back home. It's something we'll always remember, and something the team always will, too."

At the end of the weekend, Shea ran into a familiar face in the handshake line - former Jr. Ducks 16U teammate Ryan Johnson.

"It's funny, we had had a 20-minute conversation Friday morning at the rink at the morning skate. I found out I was playing about an hour after that," Shea recalled. "During the handshake line he just looked at me and said, 'What are you doing out here?' It's something he and I will look back and laugh about the rest of our lives."

Lightning then struck again on Jan. 6, when Michigan was without six players who were playing in the World Junior Championships, and a couple more who were out with injuries.

"The term going around the team is Swiss Army knife," Shea said. "We joked I could play forward, defense or in goal.

"For this to happen at this level, it seems very unlikely it's taking place at the collegiate level."