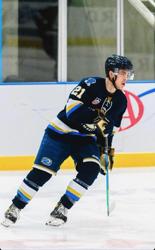 Five players with ties the Anaheim Jr. Ducks are part of the NHL Central Scouting 2022-23 Preliminary Players to Watch List.

The group includes forwards Sam Harris, Ty Henricks, James Hong, and Jaden Lipinski, as well as goaltender Dylan Silverstein. All garnered a "C" rating, meaning they are projected to go between the fourth and sixth rounds of next summer's NHL Entry Draft.

Harris, a longtime San Diego Jr. Gulls player, has committed to play Division I hockey at Denver. He is in his second season with Sioux Falls of the United States Hockey League (USHL).

The 5-foot-11, 190-pound Harris has eight points (five goals) in seven games thus far this season. Last season, Harris put up 35 points (16 goals) in 60 games. He is a late 2003 birth year and in his second year of eligibility for the draft.

Henricks, a Western Michigan commit, is in his first season of junior hockey with Fargo of the USHL. He has appeared in two games.

Hong, a Minnesota State commit, is in his second season of junior with Waterloo of the USHL. The 5-9, 175-pounder has four points (one goal) in eight games this season after putting up 24 points (11 goals) in 61 games last season. A late 2004, this is his first year of eligibility for the draft.

And Silverstein, a 2004 who committed to Boston College but reportedly has withdrawn and appears headed to junior hockey, is in his second season of eligibility. The 6-foot, 180-pounder went 16-9-0 with two shutouts last season for the U.S. National Team Development Program's Under-18 team.