Frank, Dunphy and McGowan played for 16U AAA team. Longtime Jr. Duck Connelly tendered before the draft, giving the club a total of nine selected. 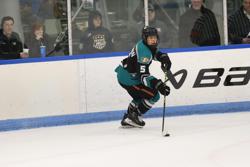 Jr. Ducks defenseman Tyler McGowan was selected in Phase I of the USHL Draft on May 2. Photo courtesy of Carmo Photography

Six players with ties to the Anaheim Jr. Ducks were selected May 2 in Phase I of the United States Hockey League draft. A seventh was acquired by a USHL team through the tender process before the draft.

The seven include three players who played for the Jr. Ducks 16U AAA team this past season – forward Colin Frank and defensemen Brendan Dunphy and Tyler McGowan.

Three more former Jr. Ducks – defensemen Andrew O’Sullivan and Tanner Henricks and forward Chase Stefanek – also were picked. And forward Trevor Connelly, son of Jr. Ducks coach Scott Connelly, was one of two players the Tri-City Storm acquired through the tender process to replace the Storm's first- and second-round picks in the draft.

On May 3, two more players with ties to the club were selected in Phase II of the draft, which was open to players of all ages who are eligible to play junior hockey and are not currently on one of the protected USHL rosters. Those two were goaltenders Owen Millward and Lucas Massie.

The Phase I draft was for players who will be under 17 next season, in this case 2006 birth years.

Frank, who was third on the 16U AAA team with 85 points, including 58 assists, this past season, was the highest selection. He was selected in the second round (27th overall) by Dubuque.

McGowen, who was picked in the fifth round (70th overall) by Muskegon, had 31 points.

Dunphy, who went in the eighth round (116th overall) to Lincoln, had 28 points.

O’Sullivan was taken in the third round (33rd overall) by Green Bay.

Henricks, whose older brother Ty was on the 16U AAA team this past season and recently committed to Western Michigan, also was picked by Lincoln, in the sixth round (86th overall).

Stefanek was picked by Sioux City in the seventh round (103rd overall).

Connelly played five-plus seasons for the club through 12U AAA.

Each of the Phase II selections is a 2003 birth year.

Millward played this past season for Janesville of the North American Hockey League, going 30-14-0 with a .905 save percentage and a 2.92 goals-against average. He was picked in the third round (34th overall) by Waterloo.