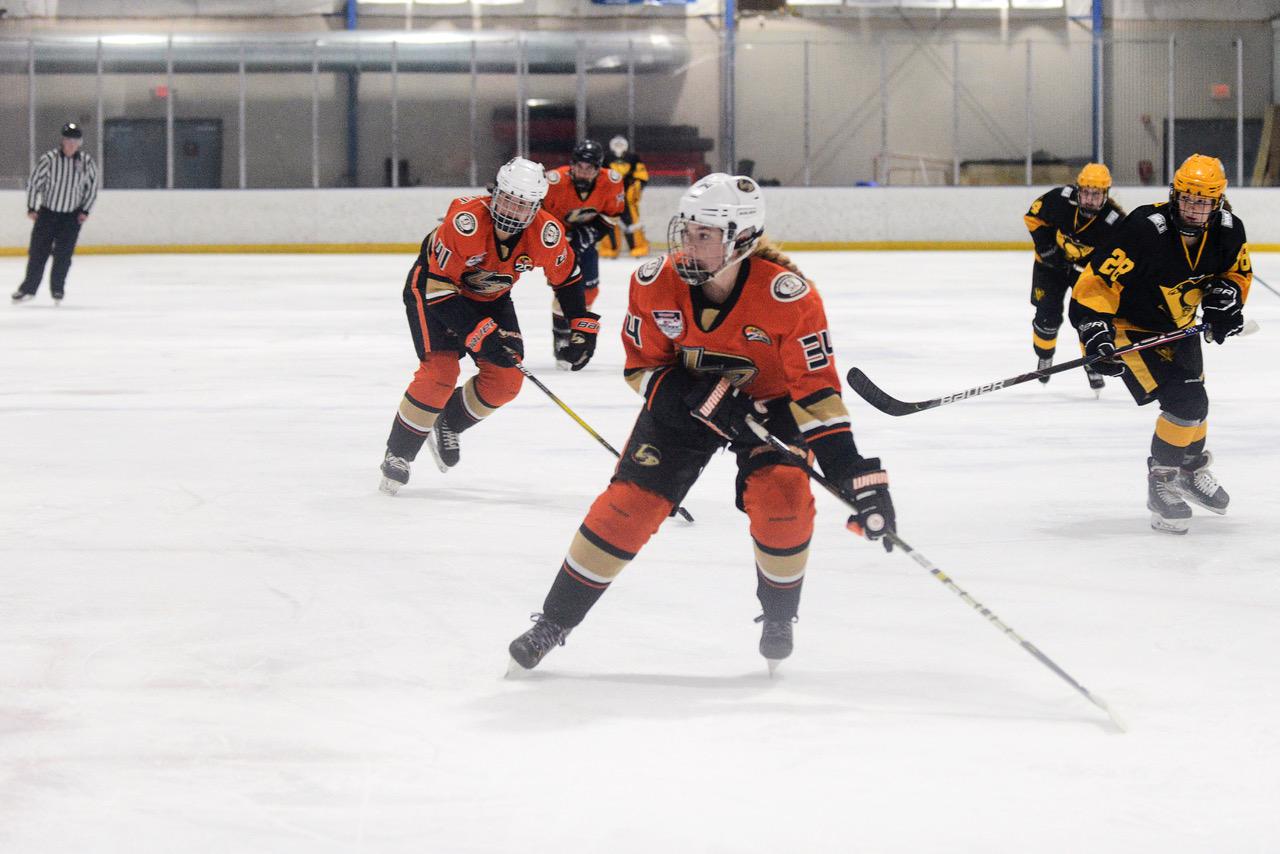 When Aubriella Westphal sets her mind to doing something, the chances are excellent she’s going to accomplish it with flying colors.

This after all is a Lady Ducks player who will graduate high school with not one not two but three associates degrees this spring. And she is going to play college hockey at Division III Marian University after just one season of AAA hockey.

How did this happen?

“I’ve always known what I wanted to do,” Aubriella said. “Same with school. That’s why I’m taking college courses now.”

A 2004 birth year, Aubriella began playing at age 10 after participating in gymnastics and dance. She watched her younger brother Luc, a 2008 who is a goaltender, and was captivated by the sport.

“I chose hockey because it was super interesting,” she said.

Not that there weren’t other opportunities to latch onto the sport. Her father Jake recalls when he started dating her mother Hilary. Hilary, who is from Toronto (and “has hockey in her blood,” Jake brags), said the relationship wouldn’t get off the bench if he wasn’t willing to watch hockey.

He began not only watching but playing inline hockey and later ice hockey. His kids took note.

Aubriella went through a learn to play program, then she moved to an in-house program near the family home in Corona. She was the only girl on her first SCAHA team during her first 14U season. At that point with the boys growing bigger and stronger, playing for the Lady Ducks made more sense.

She was familiar with the program through various offseason camps and tried out for the 14U AAA team … and didn’t make it.

After a 14U AA season, she ended up playing 19U AA the next season because she didn’t make the 16U AAA team and it was a rare season the LDs didn’t have a 16U AA squad.

“It was no again for AAA. I felt defeated when it happened, but I stayed strong,” Aubriella said.

A defenseman who skates well, Aubriella worked on her quickness and developed her shot, something she termed a weakness.

“What has impressed me is her tenacity to work hard after being told no so many times,” her dad said. “She’s always running, training, constantly trying to improve. Watching her develop, one strength she has is her hockey sense. She sees the play and communicates what’s going on. She’s come a long way.”

Former Lady Ducks coach Sarah Bier worked with Aubriella during her first three seasons with the club. Bier recalled Aubriella had plenty going for her when she joined the LDs but needed some refinement.

“The first thing I noticed was she had the skill, but she had no confidence in her game,” Bier said. “We’d keep working on things but she knew what she was doing. It took a while for her to realize that.

“Her progress from that 14U year to now is crazy. And she’s such a natural leader now. She doesn’t need a letter.”

The 2020-21 season brought a spot on the 16U AA team coached by Bier and Zealin Cronk. The team couldn’t play games in California, and it “hosted” Nationals in Colorado.

“That was a really good growth year,” Aubriella said. “We had a high-level AA team, and that got us noticed.

“At that point the light switch flipped. I realized, ‘You can do this.’ “

“This” was continuing to play hockey in college while pursuing a demanding major in nursing. Aubriella and her parents utilized the NCSA tool to analyze various colleges to try to determine where there might be some fits. She also talked to several schools, “interviewing them” as she likes to say.

That dovetailed nicely with this past season, when Aubriella made the 19U AAA team that reached the Pacific District tournament and got to see a variety of schools first-hand.

“Early in the season, (Lady Ducks General Manager) Caroline Marchant took us on a college tour,” Aubriella said. “We went to 18 schools in five days. Division I, Division III. It was an eye opener.

“I wanted to find one with a nursing program and that had strong academic support at a smaller school.”

She found that fit in Marian, which is located in Fond Du Lac, Wis. That also happened to be the school Bier played at from 2013-17, but the coach largely steered clear of influencing Aubriella.

“I tried to give as boring of answers as I could,” Bier chuckled. “This needed to be wherever was best for her.”

And Bier believes Aubriella could step right into a prominent role at Marian.

“She has such a strong shot from the blue line, and she’s worked really hard on her fitness so her speed has gotten better,” Bier said. “Her offensive side is really good. I think in college she’ll be able to contribute, particularly on the power play, right away.”

The final steps in Aubriella’s college process came this past season, when she worked tirelessly on and off the ice.

“Watching her as a coach it was cool to see her go through the college process how she did,” Bier said. “She contacted schools, she put in the work on her own. She wanted this, and I’m really proud of her for going after it.”

In hindsight, that 16U AA season really set the table for her strong 19U AAA campaign and all that has followed.

“That year gave her more time to develop and grow,” 19U AAA co-coach Patrick Angeles said. “She came in this season with more confidence with the puck. She was our best offensive defenseman. I’m really happy for her. She really worked hard.”

That applies to both on the ice and in the classroom. Thanks to her work toward college credits while in high school, she’ll enter college as at least a sophomore and will be able to start in on her nursing degree immediately.

She’ll also continue to enjoy her other passion – hockey.

“We’re really proud of her,” her father said. “The ownership she took of this process really stands out. She said, ‘I want to play college hockey. How do I get there?’”