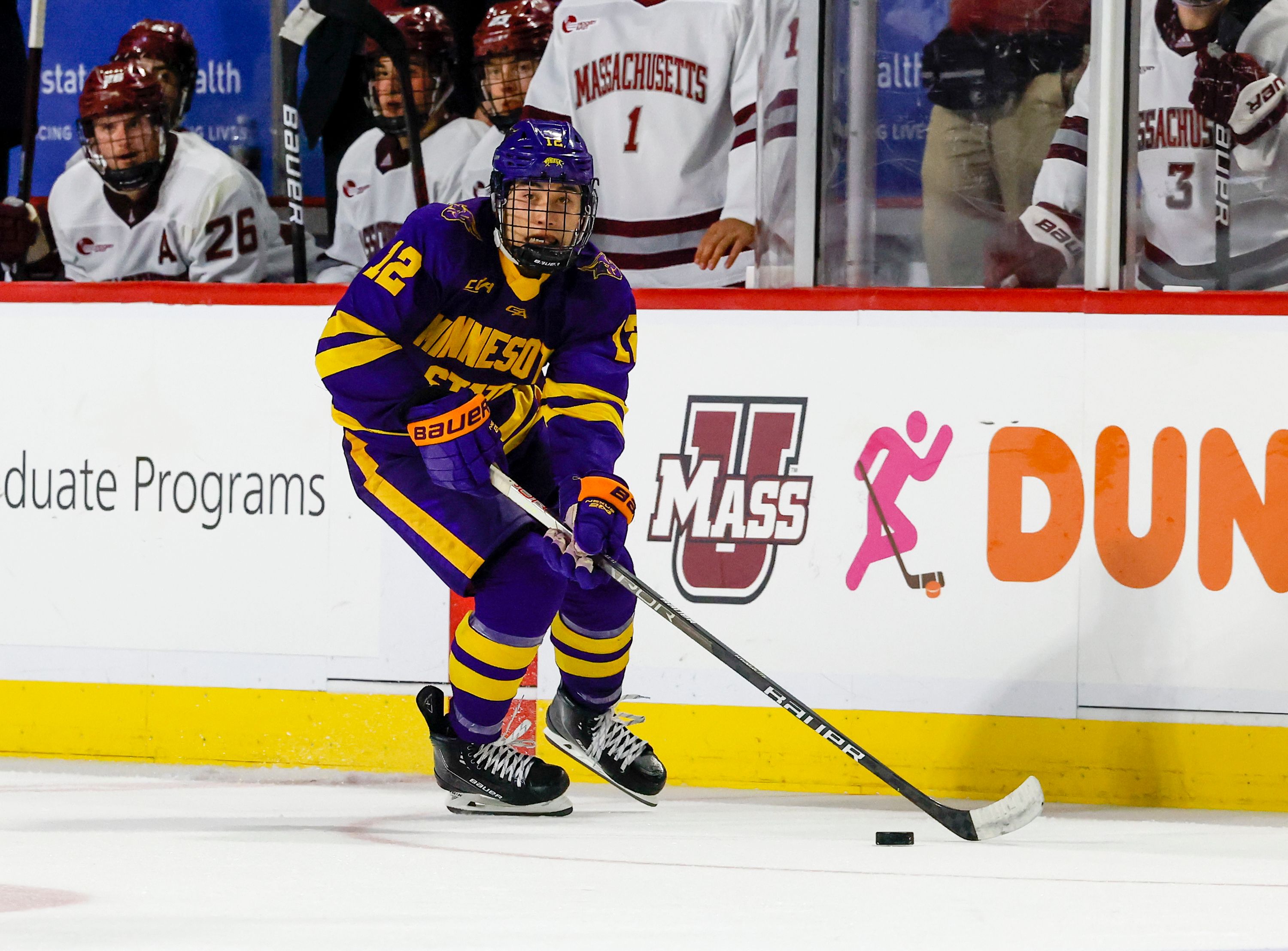 To say things didn’t go as planned for former Jr. Ducks standout Josh Groll last season might be the understatement of the year.

The 2001 birth year saw his freshman season end because of a shoulder injury that required surgery, then watched as his Michigan teammates qualified for the NCAA Tournament but then had to bow out because of a Covid-19 outbreak.

Fast forward one season, and Groll was part of one of the more bizarre sequences of events in recent hockey history. Now playing for Minnesota State, the second-ranked team in the country after – you guessed it – Michigan, Groll scored the apparent overtime winner last Saturday night in the CCHA championship game against Bemidji State.

However, an additional camera angle was found, after the Mavericks had received the CCHA’s trophy and partaken in the requisite celebration. That led to a lengthy review, and ultimately to the game being restarted from the point of Groll’s goal-no goal in overtime.

“It’s one for the history books, for sure,” Groll said. “It was a roller coaster. There was a 30-to-40-minute delay and then we were told we might have to play.

“Our focus was to stay dialed in and be ready. That’s why it ended so quickly (after the game resumed).”

Minnesota State took about 2 minutes to finish the game, this time for good, after it was alerted the game would continue. The players then had 20 minutes – including a five-minute warm-up – to prepare.

“We tried to keep our feet moving during the delay,” Groll said. “One guy actually went to the gym in half gear and rode the bike. It was nothing we could control, we just tried to stay warm and stay in the game mentally.”

That’s not unlike what Groll had to do both as he worked through his injury and then the transfer.

“It’s gone well,” he said. “This year has been a learning process, but everyone (at Minnesota State) was very welcoming. We have a very special and detailed culture. I’m learning a lot.”

Groll, who played in just two games last season before his injury, has played in 36 of the Mavericks’ 40 games and scored nine points, including four goals. He said his progression this season has come incrementally.

“I’ve had a big penalty killing role,” he said. “I’m improving my defense, and I’m trying to improve my offensive side because college is much harder than the (junior) USHL.”

He believes his time playing for 16U AAA coach Alex Kim and Director of Coaches Craig Johnson prepared him well for his subsequent steps in the game.

“When I think about my time in California, I think about the people who taught me all the habits and lessons,” Groll said. “I was fortunate to have good coaches, leaders and role models throughout my time with the Jr. Ducks.”

Minnesota State marks Groll’s fourth team in four seasons. He played for Chicago in the USHL in 2018-19 before being traded to Lincoln before the next season. He erupted for 42 points in 41 games in Nebraska before Covid shut down the league. He’s happy to have found a home in Mankato, Minn.

Minnesota State will play Harvard in the NCAA Regional at Albany, N.Y., on Thursday as it tries to reach a second consecutive Frozen Four.

“The entire experience of being in the Tournament has been great,” said Groll, who arrived in Albany with his teammates on Tuesday. “We’re excited to play Harvard.”

Groll is one of four players with ties to the Jr. Ducks who will be participating in the NCAA Tournament.

Two – Minnesota’s Ryan Johnson and Massachusetts’ Slava Demin – will square off in a regional opener on Friday at Worcester, Mass. Johnson, a junior defenseman who was a 2019 Buffalo Sabres draft choice, has scored a career-high 18 points through 36 games for the Gophers. Demin, a senior defenseman who was drafted by the Vegas Golden Knights in 2018, played in 22 games for the defending national champion Minutemen, scoring three points.

A third, Elijiah Barriga, will play a prominent role as well for AIC when the Yellowjackets play Michigan on Friday at Allentown, Pa. A senior alternate captain, Barriga scored a career-high 23 points and helped AIC win its fourth consecutive Atlantic Hockey regular-season championship and third consecutive playoff crown this season.