The defenseman helped the 18U AAA reach Nationals later this month 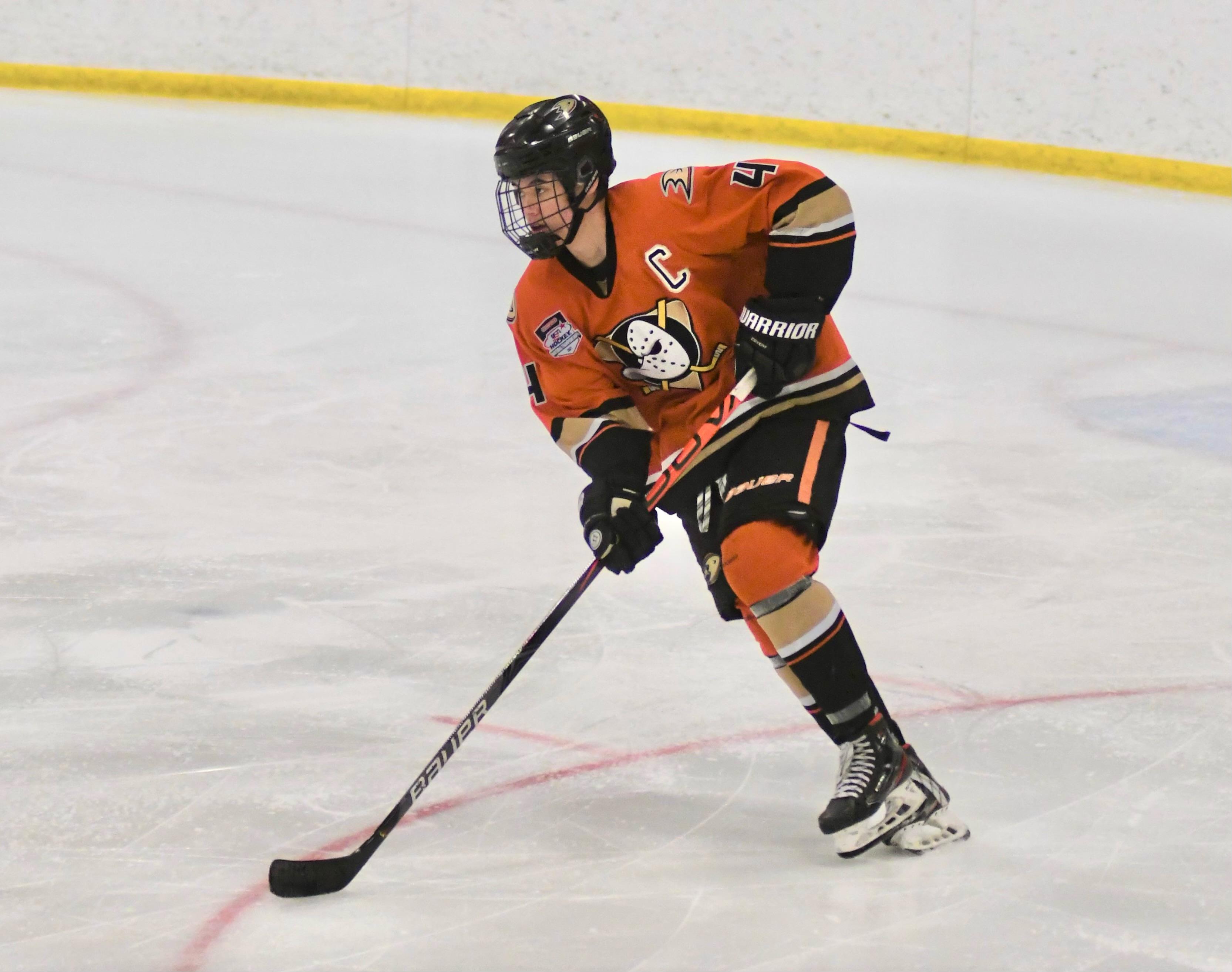 Kyle Isenberg has elevated his game this season with the Jr. Ducks 18U AAA team. If all goes according to plan, he might be elevating at an entirely different level in the future.

The 18U AAA captain recently committed to the United States Air Force Academy, making him the 35th player with ties to the club to make a Division I commitment in the past eight seasons.

“I’m extremely excited for Kyle,” 18U AAA coach August Aiken said. “It’s well deserved for him and his family. He’s taken his game to the next level this season.”

The 2004 birth year has played for the Jr. Ducks since he was a Mite, and he credits the coaching he’s received throughout his career for helping him receive this opportunity.

“All of them have been influential,” the defenseman said. “Obviously (16U AAA coach) Alex Kim and August. Scott Niedermayer was my coach up until Bantams.

“And Jason Marshall has helped all of us a lot. He comes out to all of our practices and works with the defense.”

Isenberg’s improvement this season has been clear to Aiken .

“Offensively, he’s always had the attributes to succeed at this level as well as the next levels,” the coach said. “He’s put in extra work and is getting better every time we play.”

Isenberg committed himself to doing whatever he could to shore up what he perceived to be some weaknesses in his game.

“My offensive ability has grown over the past couple of years,” he said. “My skating has improved a lot. I’ve done a lot of running and lifting, which has contributed to that.

“I’ve also studied defensemen who are successful in the NHL, guys like Cale Makar, Miro Heiskanen and Roman Josi.”

That adds to what already was a sturdy foundation, Aiken added.

“Make no mistake, Kyle is a 200-foot defenseman. I play him a ton in every situation. He’s even won a couple of shootouts for us.”

In December Isenberg and 18U AAA teammate Luke Baker played a few junior games with North Iowa of the North American Hockey League. That experience helped catapult both players’ seasons even further.

“We had a weekend of games in Phoenix right before they went to North Iowa, and that was the moment Kyle really elevated his game and got Air Force’s attention,” Aiken said. “Then he got a normal shift in the North American league, and it built his confidence. He brought that back to our level and improved even more.”

The time in North Iowa was a revelation, Isenberg said.

“It showed me I’m not that far away,” he said. “The junior players obviously are bigger and stronger, but I saw what I needed to work on.”

It’s undetermined where he will play junior next season, but he’s looking forward to joining a couple of former Jr. Ducks (freshmen Andrew DeCarlo and Drake Usher) at USAFA in a few years.

“Learning to fly a plane has a lot of appeal,” Isenberg said.

There’s still plenty of runway remaining before then. Isenberg will play in his third USA Hockey Youth Nationals at the end of the month. He also went in 2019 at 14U and in 2021 at 16U.

He’s excited to go with a core of players he’s spent the past 4-5 seasons with.

“There are a lot of guys I’ve played with every year, and we’ve developed lifelong friendships,” Isenberg said. “We’re very excited for this opportunity.”