Jr. Gulls' Mites show their might over Thanksgiving weekend

Two 8U teams win banners and a third finishes second 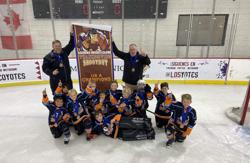 The Jr. Gulls 8U A team won a banner in Arizona over Thanksgiving weekend.

The 8U A and B1 teams won banners at the Arizona Hockey Clubs Thanksgiving Shootout, while the B2 team finished second at a tourney in Carlsbad.

8U A team rolls in Phoenix

Whatever the Jr. Gulls' 8UA team ate at their Thanksgiving team meal in Phoenix they might want to serve again.

Beginning the Arizona Hockey Clubs tournament one day after Thanksgiving, the Jr. Gulls stormed to a championship in dominant fashion. The Jr. Gulls defeated Goldrush 1, 9-1, to capture the banner only hours after a hard-fought 10-6 semifinal victory against the Jr. Ducks.

The Jr. Gulls stormed to a 7-1 lead in the semifinals, but the Jr. Ducks roared back to make it 8-6 late in the game. A goal with less than 8 minutes left gave the Jr. Gulls some breathing room.

The final marked the first time the Goldrush and Jr. Gulls had played this season.  The game started off tight with both teams hitting a couple posts, and the action was back and forth until Kyan Tosczak of the Jr. Gulls broke the dam and stuffed in a rebound in from a John Burns shot.  Fletcher DeBerry scored on a slap shot shortly after, and the Gulls never looked back. Jake Johnson backstopped them to a near perfect game, allowing just one goal.

The Jr. Gulls came out flying on Day 1 of the event with a dominant 36-1 win in their first game.  Their second Friday game continued the torrid scoring pace with an 18-1 victory.

Coaches James Dragescu and David Graves wanted to express how proud they are of how much these players have improved since the beginning of the season.

In the Labor Day tournament, the team endured a heart breaker in the Championship game.  The good thing was that the team recognized quickly that “you never lose, you either win or you learn” (Nelson Mandela).

Learn is exactly what this mighty team did during the Thanksgiving weekend - they played together as a team and improved to earn themselves a Championship banner at Arizona.

We believe that hockey is not all about winning banners (especially at this young age). It is about developing and improving players' abilities to play the sport and to aspire to become better as a whole, while enjoying this wonderful game!

We keep on challenging these players through their development as they learn and improve. A President's Day weekend tournament looms, and the team undoubtedly will face more adversity in the Mite A division.

Keep up the hard work!

Congratulations 8U B1 team!

B2 team battles to end

The Jr. Gulls 8U Mite B2 team, comprised of a fierce group of 2014 and 2015 birth-year players, took to the ice Thanksgiving weekend to face off at the Inland Empire Annual Thanksgiving Tournament in Carlsbad.

“It was great to see such a young group of players compete. Our effort was outstanding, and our players rotating in goal faced some excellent competition,” said coach Dave Scowby.

The team fell short in the final game but earned a runner-up silver medal.

“Each player contributed over the weekend and should be very proud of their efforts," Coach Scowby added. "Earning a medal at an event like this creates great memories and reminds players years down the road of the effort they put into this sport at a young age."

The B2 team returns to the ice this weekend to resume their regular season jamboree schedule.