14U AA team gets a taste of the big time

The Jr. Gulls team had a special opportunity to skate at the home of the AHL Gulls on Oct. 21. Photos courtesy of Oren Berengolts 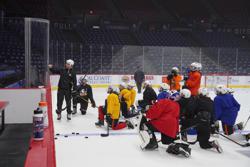 The Jr. Gulls 14U AA team practiced like pros at Pechanga Arena.

The San Diego Jr. Gulls 14U AA team enjoyed an experience of a lifetime on Oct. 21.

The group had the opportunity to practice at the Pechanga Arena, home of the American Hockey League's Gulls.

"It was a lot of fun," said 14U AA coach Noah Babin. "The kids experienced using the visitors locker room."

"Matt reached out and said he needed a team to tear up the ice a little bit so it would settle better," Babin said. "We were happy to do it, to say the least."

The Jr. Gulls' practice preceded one by the Stockton Heat, who were playing the Gulls the next night. As the Jr. Gulls were leaving, the Heat was moving in.

"One fun story from this was as we were leaving they had the locker room all set up for the visiting team, tape was set up, everything," Babin said. "That was fun for the kids to see."

Birds of a feather

The synergy between the AHL Gulls and the Jr. Gulls will be ongoing.

The Jr. Gulls 10U A team will play a mini-game during an intermission during the Gulls' game against the Bakersfield Condors on Nov. 12. And the club will be honored with a "Jr. Gulls Night" on Dec. 22. The AHL team graciously donated tickets for that.