Family ties to Switzerland and the drive to improve helped open doors for siblings Tyler and Keely Moy during the 2020-21 season. 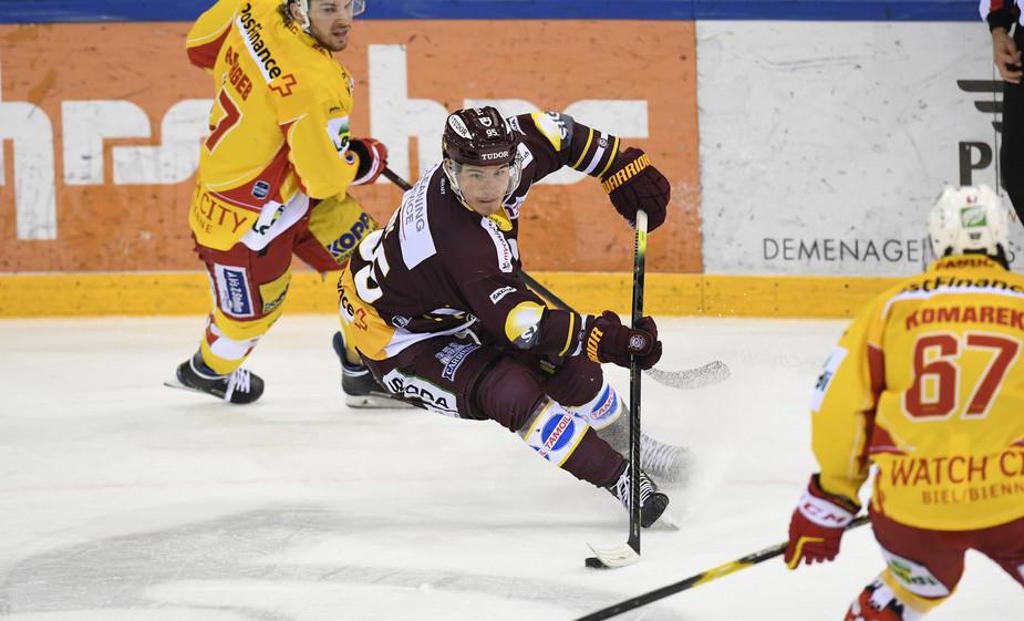 The NHL remains the goal for Tyler Moy, and don’t let his European detour convince you otherwise.

The San Diego Jr. Gulls alum enjoyed the highest-scoring season of his four full ones in professional hockey, posting 24 points (11 goals) in 50 regular-season games, and another seven points, including five goals, in 11 playoff games for Geneve-Servette HC.

And the 1995 birth year believes he has more in the tank.

“I’ve never been a person to stay stagnant, and my mindset is to continue improving,” he said.

Tyler has shown the patience and determination to make the most of every opportunity he gets. He was in his final year of eligibility for the NHL Entry Draft when Nashville called his name in the sixth round in 2015 - after his sophomore season at Harvard. He erupted for 45 points during his senior season with the Crimson then jumped into the American Hockey League, where he played parts of three seasons.

Sometimes opportunity knocks, and sometimes you have to look for it. This was a case of the latter, and it happened to come in his mother Susanna’s native Switzerland. The fact Tyler had dual citizenship played in his favor because he wouldn’t count against a team’s import limit.

His point totals have increased each of his three seasons there. He started in Lausanne, then was traded to Geneve-Servette before the 2020-21 season.

“It was good timing to go over because I was looking for a better opportunity to develop as a player,” he said. “It was a quick transition. I had a good season (in Lausanne) from a development standpoint and getting to live in a different country. The language and the culture were different so I had a lot of personal growth that first year.

“Our team had a good playoff run last season all the way to the finals.”

Tyler said a significant portion of his growth as a player has come from adjusting to a different style of game in Europe, particularly the Olympic-sized rinks.

“You’re skating a lot more, so I was forced to become a better skater,” he said. “Our systems were different than I’d played before because of the spacing on the ice. It’s a very skilled game, fast paced.

“It challenges your brain and your legs in different ways. You might beat one guy with a move, but on Olympic ice there is so much space you might have to beat another to get a scoring chance.”

As it turned out, Tyler had some company in Switzerland. His younger sister Keely spent a gap year there, and the decision could lead to her playing in the 2022 Olympic Games.

After Harvard decided to forego playing last season, Keely decided to explore what it would take to put herself in play for the Swiss Olympic team.

“I emailed Tyler’s agent and asked about the process,” she recalled. “He said come over and play a season. If I lived there eight months, it would fulfill the residency requirement.”

Play she did, scoring 11 points in 11 games for the Ladies Team Lugano and six more in six Swiss Women’s League playoff games.

“It was a great experience,” Keely said. “I got to do a lot of new things.

“I met some great people who cared about hockey a lot. Our team won the Swiss Women’s League championship.”

Keely plans to return to Harvard to play her senior season for the Crimson, but there will be one detour this fall.

“I’m in touch with their national team coach,” she said. “The tryouts are in November. Hopefully that leads to something at the Beijing Games.”

Here are updates on other Jr. Gulls alumni:

Defenseman Pasha Bocharov (2004) captained the U.S. Under-18 Men’s Select Team at this summer’s Hlinka Gretzky Cup in the Czech Republic. The 2004 birth year, who played 16 games for the Saskatoon Blades of the Western Hockey League this past season, capped capped the tournament with three assists in a 6-4 victory against the Czech Republic.

It’s safe to say the Vancouver Canucks’ crease belongs to Thatcher Demko now. The goaltender signed a five-year, $25 million contract extension this spring. The Canucks then bought out veteran netminder Braden Holtby this summer. Demko (1995) had a 16-18-1 record, a .915 save percentage and 2.85 goals-against average. His save percentage was tied for 18th in the league, but only seven players ahead of him played more games than he did. … Defenseman Chad Ruhwedel (1990) played in his fifth season for the Pittsburgh Penguins, picking up a pair of assists in 17 games. It was his ninth campaign overall in the NHL.

Forward Samantha Smigliani (2000) finished fourth on Colgate in scoring with 16 points (eight goals) in 21 games, while defenseman Tanner Gates (2000) hit double figures in scoring for the third consecutive season for the Raiders, posting 12 points. … A pair of  former Jr. Gulls wrapped up their careers at Colorado College. Forward Jack Gates (1998) played in all 23 of the Tigers’ games and 97 overall during his CC career, which included an injury-shortened sophomore season. Forward Brian Williams (1996) appeared in 49 games during his CC career. … Forward Josh Groll (2001) transferred to Minnesota State after playing in two games as a freshman at Michigan. Groll scored better than a point per game in his final season in the USHL in 2019-20. … Several more club alumni didn’t get the opportunity to play last season when their schools opted out of the season, a list that includes forward Rory Herrman (1999) at RPI, forward Nick Schultze (1997) at Tufts and forward Dominique Petrie (2001) at Harvard.

Forward Austin Ortega (1994) split time between the top leagues in Finland and Germany, totaling 20 points in 35 games. He found another gear for EC Salzburg in the playoffs, notching six points in nine postseason games. He is signed with EHC Munchen for the upcoming season. … Defenseman Alec McCrea (1995) split time between the East Coast Hockey League’s Indy Fuel (a Chicago affiliate) and the American Hockey League’s Rochester Americans (a Buffalo affiliate), playing a total of 22 games. … Defenseman Nate Kallen (1997) split time between the ECHL’s Rapid City Rush and the Southern Pro Hockey League’s Macon Mayhem, where he put up 19 points in 25 games. He has signed with the ECHL’s Maine Mariners for the upcoming season. … Forward Taylor Crunk (1995) signed with the ECHL’s Cincinnati Cyclones but the team opted out of the 2020-21 season, as teams in that league had the option of doing.