The influential youth hockey coach passed away a year ago after battling cancer. 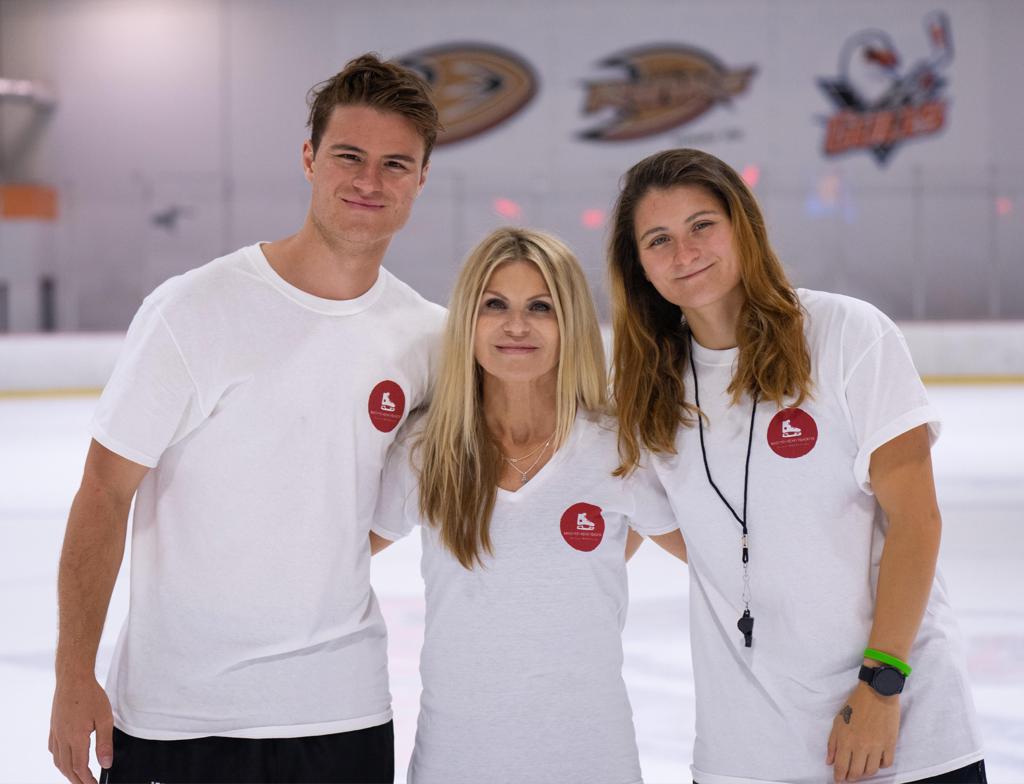 Susanna Moy, flanked by her children Tyler and Keely, was the driving force behind beginning a foundation and launching a hockey camp to honor her late husband Randy's legacy in the sport.

“Do your best everyday.”

Whatever the activity, those were words to live by in the Moy household. And anyone who came in contact with longtime San Diego Jr. Gulls hockey coach Randy Moy undoubtedly heard them as well.

Moy’s passing last July, after a courageous battle with an aggressive form of cancer, rocked the San Diego hockey community. It also strengthened the resolve of his wife Susanna and children Tyler and Keely to keep his legacy alive.

The result was the first annual Randy Moy Memorial Hockey Camp, held July 9-11 at The Rinks Poway Ice. All of the proceeds went to the Randy Moy Hockey Foundation, which seeks to provide financial assistance for young hockey players who need it in order to continue their path through the game. The first benchmark it’s aiming for is $10,000.

“I had the idea to build the foundation for him in July 2020,” Susanna said. “He had such a huge impact on the hockey community. He always wanted to help kids who couldn’t afford it.”

Any discussion about the camp has to begin with its namesake, one of the longest tenured and most respected youth hockey coaches in California.

Randy, who grew up in Michigan playing multiple sports and played Division I college hockey at Western Michigan in the 1970s, eventually coached at the collegiate level, including at U.S. International’s Division I program during the 1980s. That job brought him to the region, the place he called home for the remaining 40-plus years of his life.

Randy was a coach who got the big picture. Yes, he was an expert at teaching hockey skills, but his real goal was teaching life lessons to his charges.

“My dad’s lasting impression was his honesty,” said Tyler, who is about to enter his fifth season of professional hockey after playing collegiately at Harvard and helping the Crimson to the 2017 Frozen Four. “He may not tell you what you wanted to hear but what you needed to hear.”

Keely concurred. “Tyler and I knew how brutally honest he could be, but we learned so much from him.”

Two other things stood out about his coaching, Tyler said.

“He was all about growth, all about development, both mentally and physically,” he added. “He would cater his practices to whatever the most important aspects of that were to train whatever age he was working with.

“In later years, he changed his approach a bit. He was tough but in a different way. He learned how to interact with kids and with parents, and he applied that to give (the players) what they needed to develop.”

The camp, which sold out all 40 spots, came about quickly and could not have been done without cooperation from a legion of volunteers and The Rinks.

It also provided a ray of hockey hope in a San Diego community that needed it. Two months before Randy’s passing on July 7, the Jr. Gulls’ longtime home – Ice-Plex Escondido closed. Both events came in the midst of the Covid pandemic, which contributed to a significant segment of the community not being able to play hockey for more than a year.

“This was the first time our family felt like the moment was back,” said Amy Shefferd, whose son Quin attended the camp and played Squirt A hockey for Randy in 2018-19, and whose husband Denis was an assistant coach with Randy. “So many parents said, ‘We’re a hockey family again.’ There was a family that had moved to Seattle that came back for it.”

After spending a great deal of time getting the foundation up and running, Susanna was struck with another idea – holding a hockey camp in Randy’s honor.

“When Keely and I came back from (playing in) Switzerland in early June, our mom said, ‘I think we should do a camp’,” Tyler said. “It wasn’t on my radar but it needed to be.”

The idea jolted Keely at first, but she quickly got her game face on.

“Once I got over the shock I realized it was time to get going,” she said. “I spent days working on ideas for the shirt and the flyer. The more I thought about it, the more excited I got. Coaching is my dad’s legacy. And coaching kids is my heart.”

Divide and conquer was the theme.

“It was a lot of work for my mom – jerseys, shirts, registration, ice time,” Tyler said. “What are the workouts on and off the ice? That rested on my sister and me.

“We wanted to design something challenging, educational and fun for kids. Keely and I ran the drills and workouts; that might have been the easier part of it.

“I worked with my dad so much growing up that I had a handle on what he would have wanted. One of his big pet peeves was kids standing around instead of not getting better, so we tried to keep continuous movement.”

Tyler and Keely, who played for the Lady Ducks as well as the Jr. Gulls, tapped into their networks of peers, many of who are playing or have played pro and college hockey to help. As word spread of the camp, many others with ties to the Jr. Gulls volunteered.

“The response was great,” Tyler said. “Without great helpers you can’t have a great camp. There is so much teaching that has to take place. … The camp attracted a lot of good people because of my dad’s name being on it.”

Tyler has led skates in San Diego County for pro, college and junior players for years. That group was one the siblings drew from.

“Many people we skate with, many kids who played for (Randy), helped out,” Keely said. “We could see our dad’s impact on all these instructors. The magnitude of his legacy really hit home. It was pretty cool.

“Give Tyler a lot of credit. He said up front, ‘I want this to be a high-level camp not babysitting.’ And he did an awesome job. He’s designed drills for his friends, but we’ve never made them for 6 or 7-year-olds, or 12- or 13-year-olds. But the kids were amazing. We wanted to challenge them, and they handled it well.”

‘A breath of fresh air’

As much as Randy enjoyed teaching the game of hockey, he also loved the conversations with players and families at the rink. The camp successfully combined both elements.

“A lot of Randy’s young players came to the camp,” Susanna said. “People would come up and tell stories with us. One told me, ‘This was the first time in one and a half years my son has stepped on the ice. He was so happy’.”

Shefferd, who served as a manager for her son’s team Randy coached, said the feeling around the camp was unmistakable.

“It felt like all of our families were back. It was something that brought unity back,” she said. “The kids were constantly smiling. It looked like they felt honored to be their working their butts off. … It was well run by people who meant a lot to the community.”

The plan is for the camp to continue on annual basis and eventually to grow. Susanna said a coach from Boston has reached out to her about bringing a group of players in the future.

“My mom deserves a lot of the credit for the weekend,” Tyler said. “The most monumental part was all of the administrative work she did in creating the foundation and making the camp happen. Her intention was to have my dad’s legacy continue and impact young kids on the ice.”

The off-ice impact was apparent as well.

“Parents told Keely and me how my dad affected their lives and their kids’ lives,” Tyler said. “It was great to be part of that. We got caught up in running the camp so much that it was a breath of fresh air when parents told us how much their kids enjoyed it.

“My dad loved to stay around and chat with families. It was nice to be able to have that time again – it was the embodiment of things that existed here pre-Covid.

“He always had a joy when he was going to the rink. It was special for us to see that.”

And the Moys are far from done yet, Keely said.

“We’re definitely hoping for growth,” she said. “We’re not sure where or how we want it to grow yet.”

Concluded Shefferd, “This was the best possible way to honor Randy. It was heart warming. Randy would have wanted nothing more.”

To keep up with or to donate to the Randy Moy Hockey Foundation, please follow it on Facebook or reach out to the San Diego Amateur Hockey Club at sdahctreasurer@gmail.com