Jr. Ducks alumni made huge impacts during an unusual season 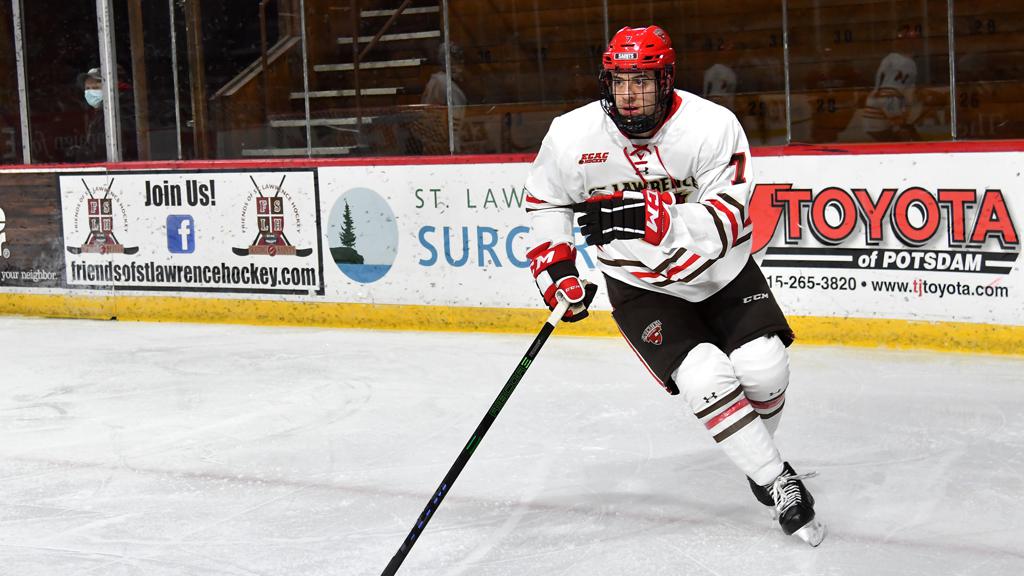 Defenseman Luc Salem went from possibly not having a place to play to helping St. Lawrence University win the ECAC Tournament./Photo courtesy of C A Hill Photo

What could have been a lost season for Luc Salem turned out to be an excellent opening chapter of his college hockey career.

The former Jr. Ducks defenseman, who wasn’t sure he’d have an opportunity to play college hockey only a few months before school started, played a big role in the Saints winning their first ECAC Hockey Tournament championship in 20 years.

Salem, who committed to St. Lawrence on June 4, 2020, ended up being an ECAC All-Rookie Team selection and a finalist for the league’s rookie of the year. And his hot streak down the stretch helped power the Saints’ playoff push. He scored seven points in the Saints’ final 10 games.

He saved his best for last, however. He had an assist on a game-tying goal against Colgate in the conference semifinals before setting up the tying and winning goals in the championship game. He had the primary assist on Justin Paul’s tying goal with 3:38 to go in regulation against Quinnipiac and then set up David Jankowski’s winner 3:44 into overtime.

“The season went better than I imagined,” Salem said this summer. “(The ECAC tournament) was an awesome experience.”

The Saints had to forego a trip to the NCAA Tournament because of positive Covid test on their staff. Though the pandemic delayed the start of the NCAA season, and that, Salem said, turned out to be a blessing in disguise.

“Something that was huge for our team was we got to practice on and off from August through December. It was non-stop practicing for three, four months,” he said. “We had 10 freshmen on our roster, and that gave us a good amount of time to adjust. But that first game we were dialed in. Our coaches did a great job preparing us.”

Salem was far from the only Jr. Ducks alumni to make a significant impact this season.

After a strong freshman season at Northern Michigan, it would have been fair to ask what Andre Ghantous would do for an encore. It turns out the forward had more to give a Wildcats team that came one win from reaching the NCAA Tournament.

Ghantous got hot midway through the season and stayed hot. He had 18 points during a nine-game stretch from late January through mid-February, and his 28 points included a WCHA-best 20 in league play. His 14 assists also were tops in the league.

He finished second on Northern Michigan with 28 points and was a Third Team All-WCHA pick as well as All-Academic Team pick.

Ghantous put the extra time the Covid lockdown gave him to good use.

“It was an interesting year with everything going on,” he said. “But my friends and I lifted weights outside and did a lot of bike riding. I did a lot of skills work during the summer.

“Once I got back to school we didn’t know when games would start, but the entire team trained hard. Our start was rough – we had to skate in small groups – but we had a good finish.”

To say 2021 has gone well for Cam York is beyond an understatement.

The defenseman captained Team USA to a World Junior Championship gold medal as the calendar flipped. He then helped the University of Michigan earn an NCAA berth (which it had to forfeit because of positive Covid tests) and won Big 10 Defensive Player of the Year in the process. His 20 points in 24 NCAA games led Woverines defensemen.

York, whom Philadelphia selected 14th overall in the first round of the 2019 NHL Entry Draft, signed with the Flyers and reported to their American Hockey League affiliate at Lehigh Valley (Pa.). Five points and eight games later, the Flyers called him up, and he made his NHL debut on May 7.

And with that he's on his way toward having a chance to earn a regular spot in an NHL lineup this coming season.

Cayla Barnes captained Boston College and was selected a second-team All-American and Hockey East First Team All-Star after a stellar campaign. The junior had 10 points and a team-best 36 blocked shots in 19 games. A 2018 Olympic gold medalist, she was named to Team USA’s squad for the upcoming Women’s World Championships.

Defenseman Ryan Johnson, who teamed up with his longtime 2001 teammate York on the WJC gold medalists, saw his role at Minnesota increase. His 14 points in 27 games were up from the eight he had as a freshman. Second among Gophers defensemen in scoring, the 2019 Buffalo Sabres draft choice helped them win the Big 10 Tournament and clinch an NCAA berth. … Defensemen Slava Demin (a Vegas draft pick whose rights were acquired by Chicago in 2020) and Kyle Mayhew each ensconced themselves in Denver’s top four, with Demin getting eight points in 21 games. Demin transferred to national champion Massachusetts this summer. … Jack Gates finished his college career having played 97 games in little more than three seasons at Colorado College. He missed all but six games of his sophomore season due to injury. … Forwards Shane McMahan (Minnesota State) and Nolan McElhaney (Long Island) saw their first NCAA action this season. … Air Force recruit Andrew DeCarlo finished sixth in scoring the North American Hockey League. He had 57 points (22 goals) in 54 for games for Lone Star of the junior circuit.

Jr. Ducks in the pros

Defenseman Matthew Caito, whose father coached in the club for many years, had an excellent season in the Swedish Elite League, scoring 31 points in 51 games for Leskands IF. Forward Darren Nowick had 11 points in 49 games for Skelleftea AIC in the same league. … Jr. Ducks also made an impact in Germany. Forwards Chase Balisy (Straubing) and Mitch Wahl (Fischtown) each had 19 points in the DEL, that country’s top league. … Forward Troy Loggins spent all season with Grand Rapids of the American Hockey League and scored seven points in 28 games. …  Defenseman Nate Kallen had 19 points in 25 games for Macon of the Southern Professional Hockey League.