The forward, who played for the 16U AAA team last season, will compete in the Hlinka Gretzky Cup. 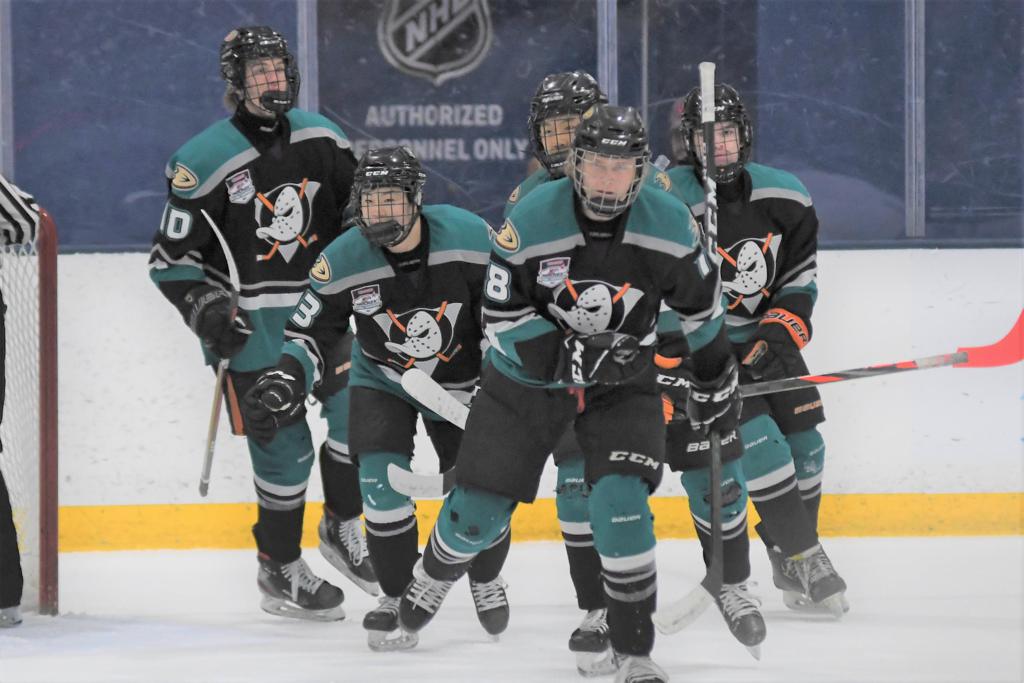 A commitment to improving and to one another helped Merril Steenari (front) and his Jr. Ducks 16U AAA teammates advance to the USA Hockey Youth Nationals in May. Photo courtesy of Tom Kluksdahl

When Merril Steenari is on the ice, he's not hard to notice due to his combination of skill and full-speed motor. So it's no surprise the longtime Anaheim Jr. Ducks forward made a big impression at the recent USA Hockey Boys Select 17 Player Development Camp at Amherst, N.Y.

The 2004 birth year was selected for the U.S. Under-18 Men's Select Team that will compete Aug. 2-7 at the Hlinka Gretzky Cup at Breclav, Czech Republic, and Piestany, Slovakia.

Steenari, who was a member of the Jr. Ducks' 16U AAA team that advanced to Nationals in May, is the third Jr. Ducks player to make the U.S. U18 Men's Select Team in the past five years. Defenseman Slava Demin, a Vegas Golden Knights draft choice who recently completed his junior season at the University of Denver, was picked in 2017, and forward Josh Groll, who was a freshman at the University of Michigan this past season, made the team in 2018.

"This is a culmination of Merril's development with the club," said Alex Kim, Steenari's 16U coach and the Jr. Ducks' Director of Player Development. "And it is a testament to years of hard work by him."

This was Steenari's second time attending one of USA Hockey's Select Camps, the first being two years ago as a Select 15. Knowing what was in store at camp was helpful, but he said going in much better prepared made a huge difference.

"I had great skill development opportunities at the new rink in Irvine (Great Park Ice and Five Points Arena) with Optimum Hockey Academy and with my Jr. Ducks team," said Steenari, who has played the past four seasons with the club. "I developed well with coach Alex this year. He taught me a lot on and off the ice. I think I've improved every year with the Jr. Ducks."

Steenari is coming off a season in which he had 73 points (37 goals) in 59 games while helping the 16U AAA team reach Nationals. His well-rounded game undoubtedly caught the attention of the selection committee.

"Our club focuses on player development, and that in turn leads to having competitive teams," Kim said. "We have worked hard in order to prepare our players like Merril achieve what he has by making this (Select) team."

"We had a solid 16U AAA team and focused on developing each individual player. That had a positive impact on the team's overall growth. Merril's achievement is representative of his efforts, teammates and coaches that he has had in the organization."

Steenari increased his points per game from 1.04 at the 15U level to 1.32 at 16U. He said that is the direct result of the focus of his training.

"My main improvement this season came on the offensive side," he said. "My stick work, shooting, putting pressure on the opposing D, creating opportunities for my teammates - those are the things I've been working on."

"Merril works hard. He's relentless," Kim said. "He is very demanding of himself and his teammates. He carries very high expectations. In addition to his tenacity, he has the ability to score at any time because he has a good release and good speed."

Steenari joins a growing group of recent Jr. Ducks players who have gained opportunities to represent Team USA. Cam York, who signed with the Philadelphia Flyers after his college season ended, and fellow 2001 Ryan Johnson, a Buffalo Sabres draft choice, helped the United States capture the World Junior Championship in January. Both, along with Demin and Groll, who also played for the San Diego Jr. Gulls, have represented the U.S. in multiple international events.

Steenari has had the opportunity to skate with many of those players as well as several other Jr. Ducks alumni who now are playing junior and college hockey.

"It's been great skating with them," Steenari said. "It brings the level of intensity up for all of us. They're great people and great players."

After the Hlinka Gretzky tournament, Steenari will head to a United States Hockey League camp in Sioux Falls, S.D., to try to make the Stampede.

"In addition to team success, our program has gained national recognition through these players' individual successes. Junior and college programs recognize they're getting players from a program that does things the right way."

More than 30 players with ties to the Jr. Ducks have made Division I commitments in the past seven years alone, and nearly as many have gone on to Division III programs. And more than three dozen former Jr. Ducks played Junior A hockey last season.