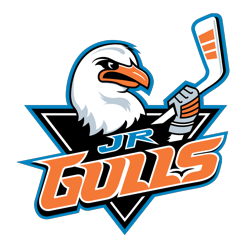 The San Diego Jr. Gulls and Jr. Gulls Girls youth hockey organizations will introduce the newly-designed logos and branding for the 2021-22 season. The logos highlight the collaboration between the American Hockey League (AHL) club and the Jr. Gulls programs, with the Gulls primary mark featured with a unique distinction for each youth team.

“We are excited to see this new look on the Jr. Gulls and Jr. Gulls Girls teams when they take the ice next season,” said THE RINKS Vice President Art Trottier. “These logos are a creative extension of the AHL’s San Diego Gulls brand that will help continue the Irvine Ice Foundation’s efforts to grow the sport of hockey at all levels in Southern California while promoting a positive atmosphere for players to enjoy their youth hockey experience.”

The San Diego Jr. Gulls will hold their annual tryouts for multiple age groups and skill levels beginning Friday, June 11 at THE RINKS - Poway ICE and will run through Saturday, June 19. More information and online registration can be found online at sandiegogulls.com/jrgulls.

The Jr. Gulls programs are dedicated to the development of players at every skill level and are based out of THE RINKS - Poway ICE, the official practice facility of the San Diego Gulls. They have consisted of teams from 8-under to 18-under for more than 50 years and are a member of the Southern California Amateur Hockey Association (SCAHA), the governing body for competitive and developmental youth hockey in Southern California and sanctioned by the California Amateur Hockey Association (CAHA) as part of USA Hockey. The Jr. Gulls have developed players that have progressed to the National Hockey League, other professional leagues, NCAA, Junior A Tier 1 & 2, and the USA Hockey National Team Development Program.